In short, yes, I did travel 6000 miles in two days, attended a party for 4 days, then flew home for another two days.

Let me start by pointing out that it was a talk.bizarre meet, customarily known as a "BOB". This was HOTT.BOB, or "Huge Outdoorsy Taos Talk . Bizarre Outragreous Blowout". And it was a BLAST.

As if that's an excuse.

The itinerary was roughly this:

So yeah. Dan and Jade said, "We're getting married, and y'all are invited.", and I spent a few weeks dithering over whether to go or not. A few months, maybe. Jenine didn't believe me when I finally decided I'd go, that's how many times I changed my mind.

A mailing list was set up to keep us all informed, and through that I negotiated a ride with Jonathan and Kristen from Albuquerque (Hey! I'm going to Albuquerque! Cool!) to the party site.

Essential items for the trip:

Other items for the trip:

The flight to Boston was pretty uneventful; at Boston, I discovered that my sleeping bag had been claimed by the Travel Gods as a sacrifice that I might get by safely. At least, that's what I told myself; I was in no mood to deal with baggage reclaim for a $20 sleeping bag.

My brother gave me directions on meeting him in Boston, and after ditching my gear in the House of Fun, we went to Paddy Burkes - which is near Fanueil Hall, if I remember correctly. We spent the evening drinking beer and playing pool. At some point I drunkenly chatted up someone in the bar and later realised I'd loaned them a pen (a nice pen, not just any old pen) and never got it back. Doh!

The following morning I walked down East Broadway and took the wrong turn to eventually get to the wrong T station, but that's okay. It still took me to Logan in plenty time for my flight.

The flight to Albuquerque stopped over in Chicago. Been there, done that.

On the way down to Albuquerque, I talked to an ex-german who was reading some sort of a history book (bear in mind I'm writing this three years after the fact!) and we had quite an engaging conversation. Berk was strapped into the seat beside me, and the kid in front of me kept leaning over and saying, "You've got a cool dinosaur". Must've been the shades Berk was wearing.

Flying over New Mexico, we saw some odd-looking columnar shapes in the clouds. My conversation-companion told me they were rain storms. Given that I live in a country where rain is either close to you or obscured by hills and/or distance, this was something I'd never seen before. VERY cool.

Off the plane in Albuquerque, I picked up my bags and walked through departure. I noticed a blonde pacing me from somewhere off to my right. She approached me and said, "you're Waider, right?". It was Kristen. Yay!

Kristen led me over to Jonathan and Ron, and we all piled out of the airport and into Jonathan's rentacar which was typically white. Why not go the whole hog and plaster these cars with large badges saying, "FOLK FROM OUT OF TOWN"?

We wandered up the main drag(!) until we located a motel, and checked in there. In the car park we met Zvi. Ron and I shared a room - no "Two Ronnies" jokes, please! - and stayed up late talking about music and such like.

In the morning, we wandered back down the main drag and found a generic breakfast purveyor. I seem to recall the breakfast being large and involving fried stuff.

After breakfast we set out for Las Vegas. Wow. Big Sky Country doesn't even begin to cover the surroundings, particularly for someone like me who comes from a 300-mile-wide, 2,000-feet-deep bowl. I spent a lot of time marvelling at wide open expanses of land several thousand feet higher than the highest point in Ireland (3,500 feet or so).

We stopped into Santa Fé, just because. We didn't like the traffic, so we kept on going.

Day in Boston, watching Elvis Movie, and then the trip home.

still a work in progress, call back later. 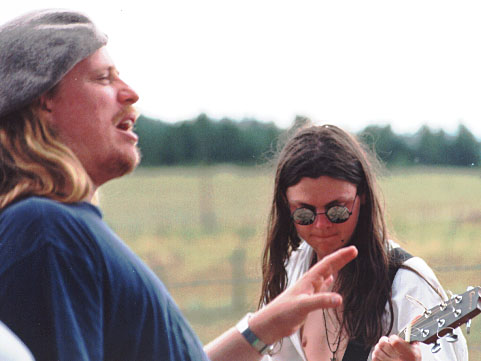 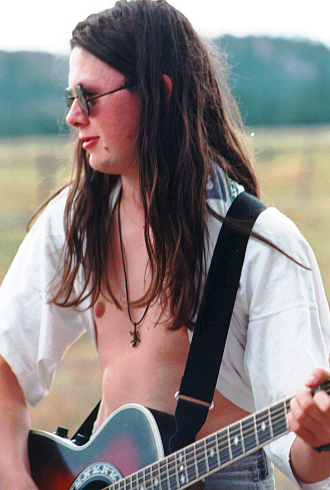 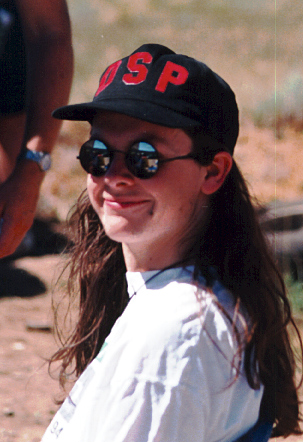 Pix courtesy of Squirty and Kristen. There's a few more about, if I can lay hands on 'em. See also my own HOTT.BOB photo scans.